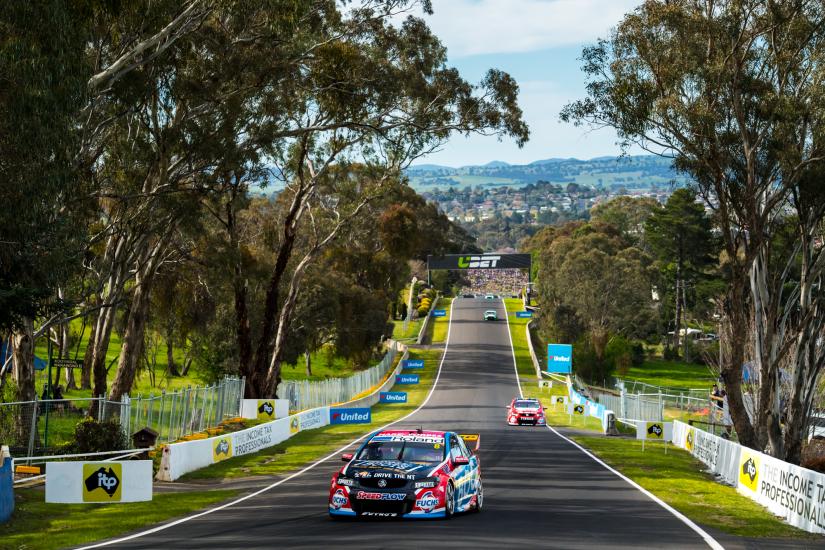 I first became aware of the Bathurst 1000 while living in Sydney, Australia in 2002.  I knew little more about the V8 SuperCar Series than it is a super competitive racing series with aggressive world-class drivers in ultra fast cars. I also knew that at some point in my six month stay in Australia, I would absolutely have to experience a V8SC race for myself.

I can still recall that chilly early morning in Sydney at the bus stop, making my trek to Sydney Motorsports Park.  The legendary V8SC driver, Mark Skafie, dominated both races that weekend and from that mom
ent on I’ve been a fan of the Virgin Australia V8 SuperCars Championship.

A big bold coun
try like Australia demands a big brash aggressive race series like the V8SC Series. As the Aussie fans say it’s “chock o block” full of great racing and they would expect nothing less than “bang for their buck.”Every October, I eagerly anticipate the Supercheap Auto Bathurst 1000. The “Great Race”, as it is known, has been held at the Mount Panorama circuit since 1963. The 1000 KM or 620 mile 161 lap race is THE pinnacle of Australian Motorsport.

The race is equivale 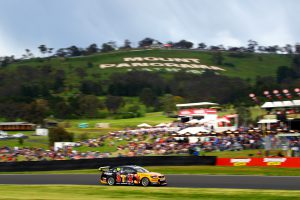 nt to IndyCar’s Indy 500 or NASCAR’s Daytona 500 and much like those big races; the Bathurst 1000 always seems to deliver BIG, nail- biting excitement. It’s truly one of the greatest races in the world.

Since 2006 the winners of the “Great Race” have received the Peter Brock trophy. The trophy is named for the late great driver, a fan favorite, who had won the Bathurst 1000 a record nine times. The 2016 race season will sadly be the 10th anniversary of Brock’s death.

Turn 1 is Hell corner, a 90 degree sharp left-hander. This leads into Mountain Straight, a gradual climb to Griffin’s Bend, an off-camber right hand corner. This corner leads into The Cutting, a sharp left-hand corner with a steep incline. Reid Park is the next corner, a complex turn that flows into Sulman Park and McPhillamy Park. Drivers are unable to see the road as it enters Skyline and the Esses followed by The Dipper, a descending blind corner similar to that of the Corkscrew at Mazda Raceway Laguna Seca. 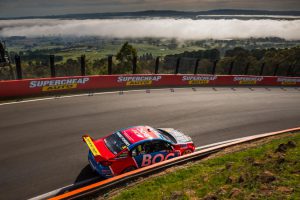 ort. Forrest Elbow leads into Conrod Straight, a nearly 1KM long straight where the cars reach speeds of 300KM per hour or nearly 190 MPH. This is the fastest place on a road course anywhere in Australia. Conrod Straight flows into a sweeping chicane called The Chase, then to a heavy breaking zone where cars slow to 130 KM per hour or 81 MPH. Next is Murray’s Corner, the slowest part of the track and the 23rd and final turn on the circuit. This turn leads drivers to the start-finish line completing the lap.  On You Tube, former NASCAR driver & commentator Darrell Waltrip does an amusing ride along lap with V8 SuperCars driver Jason Bright. (This funny video is well worth the watch!)

The 2016 race had 27 entries with a total of 54 drivers 2 per car, a main driver who is full-time driver in the V8 Supercars Series and a co-driver. The co-driver must drive a minimum of 54 laps and the “main game” driver can do a maximum of 107 laps. The rule book stipulates that a car make a minimum of 7 pit stops during the course of the race.

The 54 drivers hail from 4 nations: Australia, New Zealand, France and Switzerland. The most notable of the foreign driv 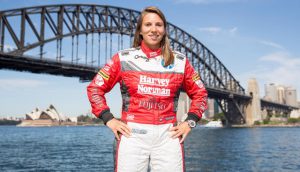 ers was former IndyCar driver Simona De Silvestro of Switzerland. For the 2017 season De Silvestro will be racing full time in the Virgin Australia V8 SuperCars Championship. Holden driver Jamie Whincup, captured the pole for Red Bull Racing Australia with a time of 2:05:04.81.This grueling 6 hour and 19 minute race had a little bit of everything from mechanical failures, (including at least one brake failure) to a minor oil fire, drivers with radio issues, bungled pit stops, a few high speed crashes and controversy. There were a total of 12 lead changes, 6 cautions for 14 laps with an average speed of 158.182 KM per hour.

The race got off to a clean start, by lap 3 Lee Holdsworth was the first car ou 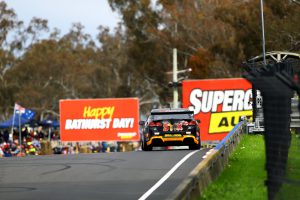 t of the race due to mechanical issues. The first 92 laps were caution free. On lap 93, Andrew Jones, in the #8 Team BOC Holden, went hard into the fence making contact with the concrete wall at 25 G’s. The next major incident occurred when
the #34 Volvo of James Moffat, lost its engine in spectacular fashion rolling to a stop in a plume of smoke on Mountain Straight. Then on lap 115, the #3 of Kiwi driver Andre Heimgartner, stopped on track at The Cutting. The next major incident occurred on lap 135 when the #1 Bottle-O Ford of defending series champion Mark Winterbottom, spun off track at high speed at The Chase.

The most controversial event of the day occurred on lap 151 of 161, when the Wilson Security Volvo of Scott McLaughlin got banged into by Jamie Whincup causing the #33 of McLaughlin to run wide off track. McLaughlin attempted to re-enter the racing surface and hit Garth Tander, who was attempting to make a pass on leader Whincup, causing Tander and McLaughlin both to wreck and ruining any chance they had of winning the race.
For this incident, Jamie Whincup was given a 15 second penalty added to his race time, costing him the race win. Will Davidson, who narrowly avoided the incident on lap 151, won the race beating Shane Van Gisbergen by a mere .143 of a second making this nail biting race the closest finish in Bathurst 1000 history. Amazingly Will Davidson & Jonathan Webb won the race without leading a single lap.

After the race, two t 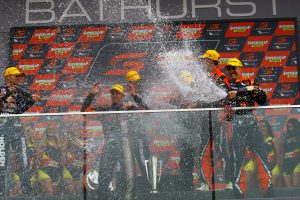 ime Bathurst winner Davidson had this to say”I knew if I lifted to save any more fuel Shane (Van Gisbergen) was going to be in there. It coughed in the last corner. I ran out of fuel when I crossed the line.” The small Tekno team punches well above its weight, running Holden customer cars prepared by Triple Eight Engineering (Red Bull Racing Australia.) The tiny team has won both the 12 Hours of Bathurst and the Bathurst 1000.

The top three podium finishers were: