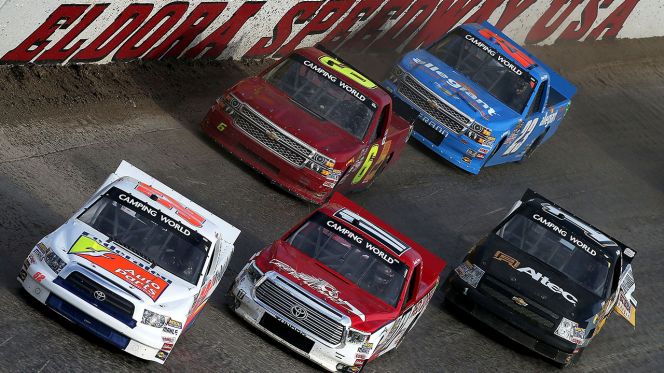 On my four hour drive to Eldora Speedway, also known as “The Big E”, a half mile clay oval located in Rossberg, Ohio, I enjoyed the scenic rural beauty of my home state. I eagerly anticipated the smell of American Ethanol racing fuel and the scent of burnt rubber from grooved dirt track Goodyear Eagle Tires (made in my hometown of Akron, Oh.)

I could not wait for all of the racing goodness of the most unique event on the NASCAR Camping World Truck Series calendar, the Aspen Dental Eldora Dirt Derby. I like Richard Petty, am happy that NASCAR went back to its dirt track roots, because dirt track racing was literally NASCAR before NASCAR was NASCAR.

Since Tony Stewart bought the track in 2004, he has made multi-million dollar renovations. From new luxury suites to an expanded pit lane, new track flood lighting, expanded grandstands, new fencing, a new media/ medical center and even a large screen video monitor located in turn two, just to name a few track improvements.

The track was built by Earl Baltes in 1954. Earl had a dream of creating “The World’s Greatest Dirt Track” amongst the gentle rolling Ohio hills of corn and soybeans. I believe that there is little doubt that collectively Tony Stewart & Earl Baltes have created just that.

The format of the Aspen Dental Eldora Dirt Derby is drivers qualify into one of five heat races. Each heat race is ten laps long. The winner of the first heat race becomes the pole sitter followed by the winner of the other four heat races. Only five drivers out of eight from each heat qualify into the “A main” race. This is followed by a last chance race where two drivers qualify into the”A main”. This “A main” is the 150 lap Aspen Dental Eldora Dirt Derby. The race is run in three segments: segment one is 40 laps, segment two 50 laps, and segment three 60 laps. A total of 150 laps for a race distance of 75 miles. Due to the format, the competition clock is not used for this event.

The pole winner for the race was dirt track ringer and last year’s second place finisher, Bobby Pierce with a speed of 86.659 MPH followed by the race heat winners Tyler Reddick, fan favorite veteran driver Ken Schrader, JR Heffner & Ben Rhodes. There were a total of 9 cautions for 52 laps. The most notable caution occurred on laps 39-42 being for a nine truck accident in turn two. The championship leader William Byron and fellow championship contender Daniel Hemric were involved in this multi truck crash. On lap 53 the number #24 of Kyle Larson, driving for GMS cut a tire and stopped on track costing him a lap. He would later make this up on lap 74 due to the lucky dog free pass. On lap 128 the #63 truck of Bobby crashed in turn two after leading much of the race. Larson went on to claim the victory (winning by a margin of only .767 of a second.) After barely holding off last year’s victor Christopher Bell. By the end of the night I was hot, sweaty and dirty but had a ton of fun. The type of thrilling race that only a unique event like this can create, Eldora I’ll be seeing you in 2017.