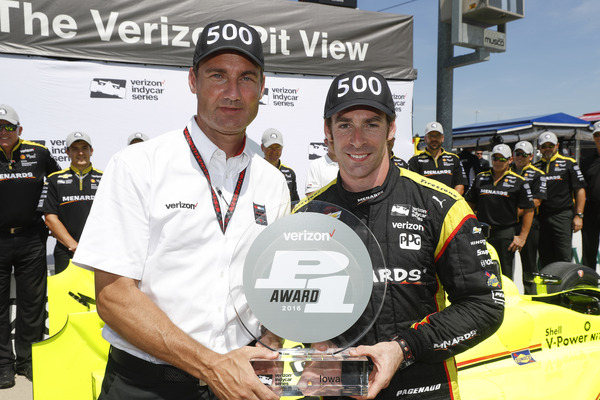 The early part of the 2016 Verizon IndyCar season has been dominated by one driver, Simon Pagenaud, “The Flying Frenchman” (a moniker I have so kindly bestowed upon him). Simon is in the midst of his best season as an IndyCar driver, possibly the best season of his racing career. The scary thing, (for other drivers) is that Team Penske feels he is likely to be a winner for years to come. Roger Penske is seldom wrong when it comes to winning in Motorsport.

Pagenaud joined Team Penske in 2015. The first season with Penske had some minor growing pains, as first seasons usually do. By the end of 2015, ”The Flying Frenchman” had racked up an impressive list of accomplishments: P1 Pole award, two podiums, four top five finishes and laps led at a multitude of tracks- Indianapolis Motor Speedway, Texas Motor Speedway, & Pocono Raceway.

The 32 year old driver from Montmorillon, France has a long list of motorsport accomplishments for the sake of brevity, I will start with 2006. The first season Pagenaud raced in North America. He won the Champ Car Atlantic Championship. With the championship came a $2 million dollar scholarship, which he applied towards his 2007 Champ Car ride with Derrick Walker’s Team Australia (the same team with which he won the 2006 Atlantic Championship).

In 2008, the young Frenchman, raced in his first 24 Hours of Le Mans. Later that same season, he joined De Ferran Motorsports in the American Le Mans Series. Gil De Ferran had this to say about the fast Frenchman: ”Very mature, very intelligent, hard working and serious. Simon was worth the risk.”

Let’s fast forward to the current season “The Flying Frenchman” has his first three-win IndyCar season, with all three wins coming consecutively. His first victory of the 2016 season came at the prestigious Long Beach GP, the second at Birmingham and the third victory the Indianapolis GP.

The last six races have seen a decline in the fast Frenchman’s performance. With only five races until the season finale at Sonoma he has seen a new rival emerge as a possible contender for the championship. That rival is Simon’s Team Penske teammate Will Power. For the first eleven races of the 2016 season Pagenaud’s average start was 3.1 and his average finish was 6.1. To date Pagenaud has a 47 point lead over Power. I see the IndyCar title fight coming down to these Team Penske heavyweight contenders. I have a feeling that “The Flying Frenchman” will be victorious.