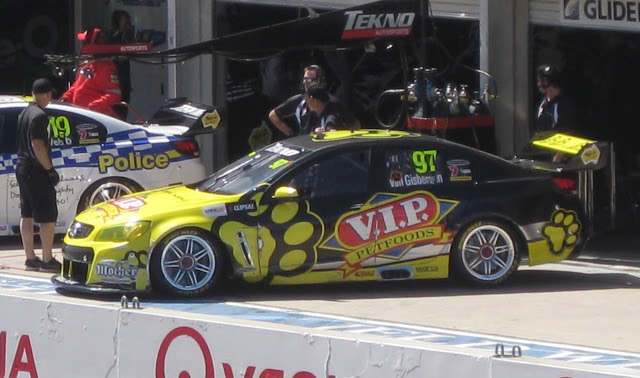 I ‘ve been a fan of V8 Supercars since 2002, when I attended an event at Sydney Motorsport Park.  In my opinion V8SC is one of the most exciting & competitive race series in the world. It’s as competitive as any of the NASCAR touring series, as exciting as IndyCar, and as much fun to see in person as Formula 1.

All history aside, this article covers the second round of the V8 Supercar Championship: the Tyrepower Tasmania SuperSprint, held at Symmonds Plains International Raceway, one of the biggest annual sporting events held in Tasmania. The circuit is located 30 Km south of Launceston in a beautiful rural setting.  A lap around the tiny 2.41 Km circuit takes the V8 Supercars a mere 51 seconds to complete.The ultra-competitive V8 Supercar series is the Australian equivalent of NASCAR. It’s a national touring series that races what are essentially supped-up road cars. The cars are four door sedans that race exclusively on road circuits. The series was once known as the Australian Touring Car Championship or ATCC.

The most notable feature of this varying-speed track is the extremely tight hairpin. The hairpin is the hardest breaking point in all of Australian Motor Sport. The track recently underwent a $2 million upgrade for the 2016 season. Some of the notable improvements include expanded gravel traps and a widening of the famous hairpin exit.

Race one is a 50-lap race covering a distance of 120 Km. All 26 cars will be running the Dunlop super soft tire, the only tire in use this race weekend. Mark Winterbottom took pole followed by Craig Lowndes in P2. The Volvo adorned by the Swedish flag, the #33 Garry Rodgers Motorsport car driven by Scott McLaughlin qualified in eighth, but was forced to start from pit lane due to mechanical problems.

The V8 engines roar to life and start the race by bumping, banging, and drafting each other. The opening laps of the race were close but clean. Winterbottom had a good start off of the line and held his position. Within the first few laps teammates Craig Lowndes and Shane Van Gisbergen were banging doors in an aggressive fight for P2. This allowed Winterbottom to gain a lead of nearly one second.

After the field pitted Shane Van Gisbergen took the lead and wouldn’t relinquish it. The New Zealander hung on to claim his first victory at Symmonds Plains and the 500th victory for the Holden automobile brand. After the race, Van Gisbergen said “That was a great race, pretty exciting at the start.” With the victory Shane Van Gisbergen solidified his role of primary driver for Red Bull Racing Australia.  Van Gisbergen is the fourth different winner in as many races.

Race two is the longer event of the Tyerpower SuperSprint weekend. This race is 84 laps 200 Km. Mark Winterbottom took pole, yet again for race two. Shane Van Gisbergen was P2 followed by Will Davidson who qualified third.

By lap four the race had its first caution due to Chris Pither hitting the fence hard at the hairpin. The leaders pitted to get fresh tires and the required 120 liters of fuel. Early in the race, it looked as though Shane Van Gisbergen would run away with it. On lap 42, Jamie Whincup made a rare mistake and ran off circuit and into the gravel trap, at the hairpin due to cold tires. The caution and Safety Car came out for two laps. Lap 44 the race restarted with Shane Van Gisbergen in the lead with Mark Winterbottom in hot pursuit, followed by Craig Lowndes and Will Davidson in fourth.

Lap 80 four cars ran off track at the hairpin due to oil on the track. In the confusion Shane Van Gisbergen hit the oil slick and slid into the kitty litter, giving the race to Will Davidson who held on for the final four laps. After the wild race finish, Davidson had this to say: “Hope you enjoyed that one. I did.” Davidson became the fifth winner in five races.

Like I said V8 Supercars offers some of the most exciting and competitive racing in the world.