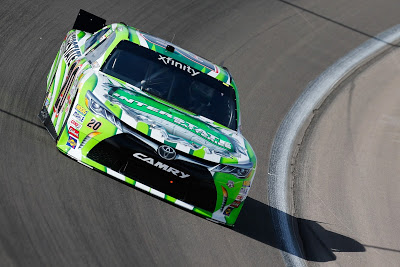 From now on, the top 3 surprises list will include all three NASCAR Series; Camping World Truck Series, Xfinity Series and Sprint Cup Series.

Erik Jones, age 20, a Camping World Truck Series champion (2015), moved up to full-time racing Xfinity Series this season. Erik, is, considering his young age, not a stranger to drive in higher series in NASCAR. He started 23 races in the Xfinity Series last season, collecting two wins, 13 top- five, 17 top-ten and three poles.
in the

Erik also got some extra experience with three starts in Sprint Cup Series last season for Joe Gibbs Racing, driving the #18 car once and the #20 car twice (total avg. finish 23.7). Erik started his career in ARCA Racing Series 2012 (10 starts) and he is the 2012-2013 Snowball Derby winner.

At Las Vegas Motor Speedway, Erik was in a “rollercoaster” race. Starting in front row (P2), Erik had a good momentum in the beginning of the race. After an incredible two penalties (!) for driving too fast on pit road, the race appeared to slip away for the 20 team.

Erik Jones wouldn’t accept this and managed to do a remarkable comeback with excellent driving and good pit calls from crew chief Christopher Gabehart. Erik even managed to pass Sprint Cup drivers Chase Elliott (P4) and Austin Dillon (P5) along the way. That was really remarkable driving and Erik Jones has a rare talent that we race fans don’t see very often these days.

Moving over to Richard Childress Racing (RCR), Brandon received five starts last season in the Xfinity Series with good results – one top-five and two top-10 finishes and an average finish of 15.0.
Brandon started his first K&N Pro Series East race in 2012 at the age of 15! He finished in position 14 in his debut race. At the age of 16, Brandon started three truck races for Turner Scott Motorsports (closed down 2014) with a position 19 finish as a highlight.

After three starts in his rookie season (Xfinity Series), Brandon has a finish of P7, P11, and latest in Vegas, P6. Brandon’s statistics are impressing after three races with an average start of 10.3 and an average finish of 8.0. Crew chief Mike Hillman Jr. is handling his young talented driver just the right way. It will be interesting to follow Brandon Jones this season. Can he continue his solid finishes? I personally think so.

driving full-time in Camping World Truck Series 2013-2014 (Brad Keselowski Racing), in which Ryan ended up in position six (2013) and position two (2014) in the final standings; he went back to part-time racing in the Xfinity Series (Team Penske) and Sprint Cup Series (Wood Brothers) in 2015.

While Wood Brothers didn’t get a charter for this season in Sprint Cup, but I think they can manage it anyway. They are, after all, a very experienced race team. After the first two races in Wood Brothers “comeback” – Ryan finished in position 19 (Daytona) and 25 (Atlanta).

At Las Vegas, they really hit the mark with a position 6 finish. Crew chief Jeremy Bullins made the right calls down on pit road and Ryan drove that legendary #21 car up in top-10 for long runs. I think that’s impressing for a single car team and I also think many NASCAR fans were pleased to see the classic paint scheme of Ryan’s car up there in the mix, competing against NASCAR’s strongest teams. I don’t think this will be the last time. (JS)