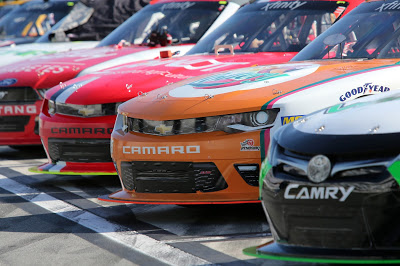 Brennan was sharing the seat in the #42 car with another Chip Ganassi driver, Kyle Larson last season. Brennan started seventeen races last season in the Xfinity Series and received two top-10, an avg. start of 16.6 and avg. finish of 18.6. Brennan’s best finish, position 9, was at Las Vegas after starting position sixteen. That was Brennan’s debut race in the Xfinity Series.

Brennan has only made one start in the Camping World Truck Series and that was also at Las Vegas last season (GMS Racing – P11). Brennan is still lacking race experience from Sprint Cup, but he was part of Jamie McMurray’s (Chip Ganassi) team last year as an observer.

This year, Brennan got a full-time ride with the new #48 team with Chad Norris as crew chief. After four races this season, Brennan has one top-10 finish with an avg. start of 11.5 and avg. finish of 15.5.

The Daytona finish (P27) is taking the average finish statistics down a little, but after Daytona, it has been strong solid finishes all the way. I have also noticed that the #48 car is getting its share of valuable “TV-time” in the FOX broadcast, via the so called “DC-Solar onboard” camera. Good for Chip Ganassi and off-course for the sponsor. I think we will see more top-10’s from Brennan Poole this season.

Matt Dibenedetto, age twenty-four, made his debut, not in the Truck Series, but in the Xfinity Series in 2009 at the age of seventeen. Matt only started once in 2009 for Joe Gibbs Racing, driving the #20 car and received a good position fourteen finish.

Not bad for a seventeen-year-old driver in his first NASCAR race ever. After 2009, there was limited race time for Matt. In 2011, he had to go back to race in the K&N Pro East Series and a few ARCA starts as well. Then in 2014, Matt joined The Motorsports Group, who then raced in the Xfinity Series. Matt start-and-parked the #46 car for twelve races and drove the #40 car for the remainder of that season with a position eleven highlight at Elkhart Lake.

In 2015, Matt joined BK Racing and made his Sprint Cup racing debut the same year. Driving full-time in 2015, Matt started thirty-three of thirty-six races with two DNQ. The statistics is giving us a start average of 36.5 and a finish average of 32.0, with a position eighteen finish at Talladega as a highlight that year.

In 2016, BK Racing bought equipment from recently closed downed Michael Walltrip Racing (MWR), including some of the MWR personnel. After a rough start with a crash at Daytona 500 (in car #93), Matt with his team crew chief Gene Nead, have rebounded well. They managed to get their best finish of the season last weekend in Phoenix, ending up only one lap behind in position twenty, after starting in position twenty-three. It seems that BK Racing is trying to, with their full-time starting cars #83 and #23, be a top-30 team once more. I think they got a shot at least.

Kasey Kahne, age 36, is a seventeen-time winner in Sprint Cup Series. Kahne has started 436 times in Sprint Cup in thirteen years and earned 86 top-5, 157 top-10 and 27 poles. His best year was in 2012 when he finished fourth in the overall standings.

Kasey has also started part-time in the Xfinity Series since 2002 with a good portion of success there as well. Winning his first ever Sprint Cup race in 2005 at Richmond with a Dodge Charger, the road of success was a fact.

Taking over Mark Martin’s #5 car in 2012 at Hendrick Motorsports, the expectations were high on Kasey and he delivered his best overall finish that year (P4). After two acceptable seasons in 2013-2014 (Rank 12 and 15 overall), Kasey’s results started slowly to decline.

His last win was in Atlanta, 2014. In 2015 season, Kasey only received three top-5 finishes with an average start of 14.9 and an average finish of 18.1. Kasey ended up in position 18 in the overall ranking and that cannot be acceptable when driving for Rick Hendrick.

I thought the 2016 season would be a rebound for the #5 team. I also thought that Kasey and his crew chief Keith Rodden would come out strong and hungry and really show that they have what it takes.

However, after four starts so far, the avg. start is 14.0 and the avg. finish is poorly 17.0 – with one top-10 at Las Vegas. No laps led so far and in Atlanta and Phoenix the #5 car was not even on the lead lap at the finish. Right now, the overall ranking for Kasey is position 14.

It will be interesting to see if this trend will continue or will the team turn things around? (JS)