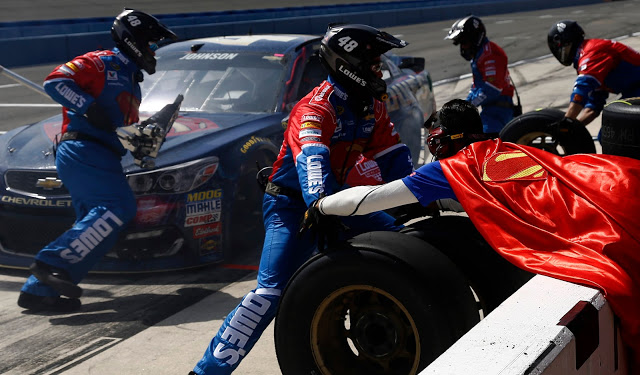 This past weekend NASCAR had its final race of the NASCAR Goes West Tour in Fontana, CA. Roger Penske built Auto Club Speedway. The track is a fast & rough two-mile super-speedway. The speedway is hard on both tires and engines. Its worn-out surface is like sandpaper to tires.

Victory on this super-speedway requires horsepower, downforce and great race craft. The cars reach a top speed of around 207 MPH. The Auto Club 400 is a 200 lap event. Austin Dillon, took the pole with a speed of 188.482 MPH.

The sunny California race had a Hollywood theme “Batman Vs. Superman: Dawn of Justice”, for the upcoming film of the same name. This theme created a hero face-off, as Jimmie Johnson raced a special paint-job sporting the Superman S, and his teammate Dale Earnhardt Jr., raced a Batman- themed car.By lap 27 we had our first caution, due to Brian Vickers cutting a tire. Tire issues (especially rear left tire issues) would be a re-occurring theme of the race. Vickers was one of at least four drivers to experience major “tire issues”.

Goodyear Tire (based in my hometown “Rubber City” Akron, Ohio) advised teams to go no lower than 18-19 PSI on left side tires. Some teams were running left tire pressures as low as 13-14 PSI. This surprised me, since low tire pressures can lead to blow outs which make the high speed missile that is a NASCAR race car impossible to control. This can put drivers in great risk of injury.

Another re-occurring race theme is safety devices that prevent driver injury. On lap 48 Kyle Larson had his rear left tire blow, causing a brake line to snap, which shot him into the Safer Barrier at over 150+ MPH. The barrier did its job, absorbing much of the force. Luckily the Safer Barrier was a new addition to that part of the track for the 2016 season. The downforce from the large roof flaps kept the #42 Target car from flying into the air. The combination of these safety devices kept Larson from what would have been certain injury only a few years ago.Another event displayed how safety evolution prevents driver injury. Kasey Kahne clipped the rear of Danica Patrick’s car going approximately 190 MPH. The roof flaps deployed using downforce, keeping her car from going airborne. As with Larson, this combination of the Safer Barrier and roof flaps kept Danica from any injury. She was however, angry at Kahne for prematurely taking her out of the race.

A late caution for debris, bunching the cars close to each other, changed the dynamic of this ultra-competitive race. At one point the top three cars had run exactly the same lap time. Kyle Busch, blew out a tire with just a few laps to go; this pushed the race into “overtime” for the third time in five races.

At the final restart of the race, the #48 Superman car of Jimmie Johnson went low, side drafted Kevin Harvick and Superman flew into the lead. On the final lap of the race, Jimmie Johnson posted his fastest lap but even so, he barely held off the #4 car of Harvick. Johnson took his 77th career victory, surpassing Dale Earnhardt Sr. With this, Johnson earned his 6th win at his home track. The man of steel, Jimmie Johnson, has more victories at Auto Club Speedway than any other driver. Kevin Harvick led 142 laps of the 200 lap race. The race had a total of 26 lead changes. Chase Elliott took the top rookie honor by finishing in 6th.

After the race, Jimmie Johnson took a Superman leap into the crew’s arms. Johnson stated: “It’s a long year, we need to do this all year long”. To paraphrase Jim Croce, “you don’t tug on Superman’s cape, and you don’t mess around with Jim” (mie Johnson).