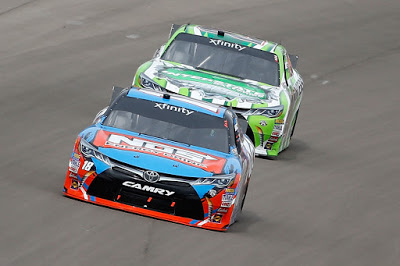 This weekend I watched the Phoenix Xfinity race, it left me with more questions than answers. The track is a wide multi-grooved one-mile oval located in the Arizona desert. The entire race was “the Kyle Busch show”.

Kyle Busch simply dominated this race leading 175 laps of the total 200 laps. Busch has won more Xfinity races than any other driver in the field. The win at Phoenix marked his 79th victory in the Xfinity Series. He is currently the all time leader in series wins. The only active track he has yet to conquer is the road course at Watkins Glen and I wouldn’t be surprised if he marks that off of his list in August.

His dominating performance led me to ask myself several questions:

I agree with Brendan Gaughan, driver of the #62 Chevy, who said “The way to get better is to race the best.” I believe that there are some limits to this idea, such as the current situation of a top level driver dominating a smaller series meant for younger drivers. I get that it gives the Sprint Cup drivers a better feel for the various tracks at which they do double duty.

That is the whole point of lower level series isn’t it? I would be interested in hearing different fan’s perspectives on this issue.