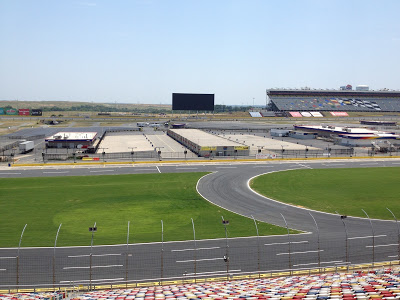 When I first saw Charlotte Motor Speedway, I was impressed by the modern grandstands, the expansive 2,000 acre complex and the overall quality of the facilities.  Having a race track “impress me” is no small feat as I have been to racing venues all over the world. I’ve seen the rural beauty of the vast Spa Francochamps Formula 1 track in Belgium,  the dusty thunder dome of the V8 Supercars track at Sydney Motorsports Park in Australia, and the home of the Indy 500 the “Racing Capitol of the World” the Indianapolis Motor Speedway.

Here are some fast facts about Charlotte Motor Speedway. Its located 13 miles from the Queen city in Concord, NC. Charlotte is one of the eight Speedway Motorsports Inc. tracks. The others are: Atlanta, Bristol, Kentucky, Las Vegas, New Hampshire, Sonoma and Texas. The 1.5 mile quad oval track has a front stretch of 1,980 feet and a back stretch of 1,500 feet. The banking in the corners are 24-degrees and 5-degrees of banking in the front stretch. The track has 113 luxury suites and a total seating capacity of 134,000. The track includes a 2.25 mile road course and a six-tenths-mile karting layout and a quarter-mile oval all within the speedway walls.

The track is considered the “Home track” of NASCAR. In its 50+ years Charlotte Motor Speedway has evolved into “The Greatest Place to see the Race”. Due to its unique location in the heart of NASCAR country, a fan can see a race, visit race team shops and visit the NASCAR Hall of Fame all in the same weekend.

The speedway is the culmination of a dream for automobile dealer and short track racing promoter, North Carolina native Bruton Smith and his business partner, early NASCAR star Curtis Turner. Turner made his money in the lumber industry. They broke ground for the $1.25 million dollar track in 1959. The first race was held on June 19th, 1960- the World 600.  It is NASCAR’s Southern race to rival that of the North’s Indy 500. The inaugural race was won by Joe Lee Johnson.

Sadly, by 1961 the track had fallen into bankruptcy due to lagging ticket sales. By 1962 Bruton Smith had departed from the speedway to focus on his automotive dealership and banking interest, which involved a move to Rockford, Il. These ventures proved finically successful and by 1963 $750,000 had been paid to creditors and by 1967 the mortgage had been paid. Smith began to purchase shares of the speedway and by 1974 he was the majority shareholder. Richard Howard who was in charge of the day-to-day operations at the speedway stated “I haven’t been running the speedway. It’s been run from Illinois.”

In 1975 Smith took over full control of the speedway. One of the first things he did was hire H.A. “Humphy” Wheeler, as General Manager. The two began to plan improvements and track expansion. This expansion established many new industry standards. In 1984 Charlotte motor speedway became the only sports facility in America to offer year- round living accommodations when it built 40 condos on the property. During this period, the owners built new grandstands and luxury suites. To aid fans in ”creature comforts” they added more concession stands and bathrooms. In 1988 they built Smith Tower, a seven story building connected to the grandstands. This building houses corporate offices, ticket office, gift shop and the Speedway Club an exclusive fine dining restaurant.

In 1992 the speedway added a state of the art $1.7 million dollar 1,200 fixture lighting system to simulate daylight. Charlotte Motor Speedway became the first super speedway to host night racing. The 1992 NASCAR All-Star race. Davey Allison, won the first event, though he had to be cut out of the car after being knocked unconscious after a collision with Kyle Petty moments after taking the checkered flag. Allison celebrated the victory in a hospital bed.  Charlotte was the largest lighted super speedway until 1998 when Daytona added lights.

In May of 2000 a 14,000 seat four-tenth-mile clay oval was completed across the street from the super speedway. The Dirt Track at Charlotte annually hosts the World Of Outlaws dirt series World Finals, an event I have attended. I was very impressed with the world class dirt track.

In 2006 Charlotte Motor speedway became the first motorsports venue to host the world premiere of a major motion picture. Celebrities as well as 30,000 fans came to view the Disney/Pixar film “Cars”. The track has also played host to a number of films like: “Days of Thunder”, “Speedway”, “Stroker Ace” and “Talladega Nights: The Ballad of Rickey Bobby.” Many corporations such as Lowe’s, Coca Cola, Sprint and Nationwide use the track to film TV commercials. The track is one of the busiest sports facilities in the United States. It hosts over 380 events a year and is used 300 days per year.

The track has also had its share of dark days. From 1997-1999 the track hosted the IndyCar Series. On the 61st lap of the 1999 race, a crash caused a car to lose a tire and the tire was propelled into the grandstands killing three and injuring eight. In May of 2000 after the NASCAR All Star Race a pedestrian bridge collapsed causing an 80- foot section of the bridge to fall 17 feet onto a highway, injuring 107 fans. This resulted in nearly 50 lawsuits, many of which were settled out of court.

If you ever have an opportunity to go to any of the NASCAR events held at the Charlotte Motor Speedway, be sure to go. You will be impressed with the modern track, the “fan first” attitude of the staff and the friendly fans. While you are in Charlotte hit up several of the team shops and the NASCAR Hall Of Fame you won’t regret it. While you are at it try some of the delicious Carolina style barbecue you won’t regret that either.