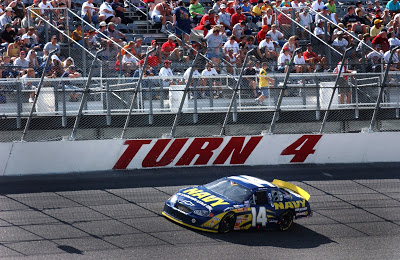 As the son of a history teacher and a fan of
anything motorsport, I find the idea of a “throw back” Darlington
race thrilling. The race will feature:
fourteen NASCAR Hall of Fame members in attendance, at least thirty-two retro
inspired Sprint Cup cars, pit crews wearing and drivers wearing retro style
clothing.  Goodyear Tire is even supplying
an “old school” looking tire for the weekend. This race will be a ton
of fun I applaud the track, sponsors and drivers for putting on this retro
themed race.

For the first time since 2003, the Bojangles
Southern 500 will be held on its traditional Labor Day weekend.  As ESPN analyst and former NASCAR driver Ricky
Craven, stated “Darlington is synonymous with Labor Day weekend. Moving it
to a spring race felt like inviting Santa Claus to Halloween.”
The tiny town of Darlington, SC., has a
population of under 7,000. Its story of becoming home to one of NASCAR’s most
historic tracks is an intriguing one. In 1933 South Carolinian businessman Harold
Brasington, attended the Indy 500. Upon returning home, he began telling his
friends that the South needed a paved race track like Indy. Brasington had a feeling
that Bill France’s new stock car league, NASCAR, might catch on.
His friends laughed at him, but Harold kept
plotting. He found the perfect plot of land in 1949, and building began. The
site was a dusty old field that had previously grown cotton and peanuts.  Around Darlington the building of the 1  1/4 mile asphalt track, became known as
“Harold’s folly”. The track is an unusual egg shape because turn-
three and four were narrowed to protect landowner Sherman Ramsey’s fishing
hole. The oddly designed raceway, is extremely hard to drive giving, it the nickname
“Too tough to tame”.
The historic raceway hosted its first race
on Labor Day September 4th, 1950. This historic event was NASCAR’s first 500
miler and first race on asphalt. Brasington expected 10,000 fans and was
shocked when 25,000 fans crammed the facility. Seventy-five cars entered the
first Southern 500, with Curtis Turner taking pole. Hollywood Stuntman turned
racer Johnny Mantz won the event in an old black taxi cab, using only one set
of truck tires.
One
hundred and eleven different drivers have won a Sprint Cup race in the
raceway’s sixty-five seasons.  Many drivers
say Darlington is by far the hardest racetrack on the NASCAR schedule. They
ride inches from the wall, a breadth from success or failure. The track is
famous for its “Darlington Stripe” a scuffing of the sheet metal on
the passenger side.
“The Lady in Black” has seen a
lot of history:
1957-Speedy Thompson wins, Southern 500
averaging 100.094MPH. The first time a NASCAR race surpassed the 100MPH
barrier.
1963-Fireball Roberts wins the only caution
free Southern 500.
1965-Ned Jarrett wins Southern 500 by
fourteen laps, more than nineteen miles! A record likely to never be broken.
1970-Richard Petty flips his car and
suffers a broken shoulder.
1977-A classic duel between Darrell Waltrip
and Cale Yarborough causes both of them to wreck and David Pearson to win the
race.
1982-Cale Yarborough becomes first driver
to win with four different manufacturers.
1985-Bill Elliot wins Daytona 500, Winston
500 and Southern 500 to win one million dollar bonus, making him “Million
Dollar Bill”.
1990-Part of the movie “Days of
Thunder” is filmed at Darlington Raceway.
1995-Jeff Gordon wins his first of seven
wins at the track.
2003-One hundredth race at Darlington,
Ricky Craven beats Kurt Busch by NASCAR record of .002 of a second.
2012-Jimmie Johnson gives Hendrick
Motorsports two hundred wins, with a win at Southern 500
2014-Kevin Harvick wins Southern 500 and
Sprint Cup championship.
Like any good student of history I
recognize that history is married to the future, this ”throw back”
Darlington race will be the testing ground for the low down force aero package.
This package could help to shape the 2016 NASCAR rule book.