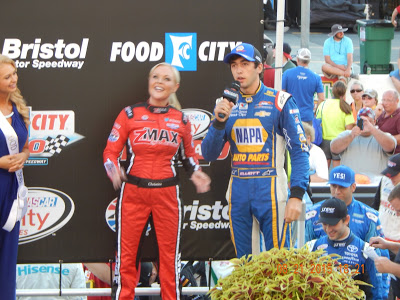 Nineteen -year- old Georgia native, Chase
Elliott is one of NASCAR’s brightest young stars. He’s consistently won at
every level of Motorsport he’s participated in from ARCA to the Camping World
Truck Series.  As the son of NASCAR hall
of fame driver Bill Elliott, winning may literally be in his DNA. As a racer,
Chase is mature, poised and humble. He is extremely honest with himself and is
his own toughest critic.
This rare set of characteristics will serve
him well in 2016, as he moves full time into the Sprint Cup Series. Chase is
taking over driving duties in the number twenty-four Hendrick Motorsports Chevrolet,
currently driven by four- time champion Jeff Gordon. He will have some big
shoes to fill, but I feel the fast “young gun” has the feet to fill them.  Chase, referring to the move to Hendrick
Motorsports, said”I know how rare this opportunity is and I will work as hard
as I can to make everyone proud.”
Forty-four time race winner and 1988 NASCAR
Sprint Cup champion “Million Dollar Bill” Elliott has offered his son
some great advice: “the sport isn’t always going to be easy and it’s difficult
to get to the top and stay there“. He followed with ”You’re only as good as you
were in that particular race. So to me it’s a matter of trusting your ability,
but also keeping those good people around you who can get you to that next
level.” Chase feels that much of his racing success comes from being surrounded
by great people / great teams, both at JR Motorsports in the Xfinity Series
& Hendrick Motorsports in the Sprint Cup Series.
Chase Elliott has already had more than a
few milestones in his budding young career. Upon winning the Xfinity series in
2014, he became NASCAR’s youngest national touring series champion.  Chase was the first driver to win both the
championship and rookie of the year in the same season. He won his first
Camping World Truck Series race at Canadian Tire Motorsport Park in only his
seventh CWTS start.
This season Chase made five Sprint Cup
Series starts to gain experience: Martinsville, Charlotte, Indy and Darlington.
When talking about the steep learning curve Chase said “I think it’s
definitely been a big learning experience. Definitely Martinsville, as
everybody saw, was a bad day for me. Definitely not the way I wanted to get
things started. I think since then, I thought Richmond went really good. Indy
was okay, had a good time at Charlotte, thought we had a good car there and got
some damage.” He went on to say “These guys are here in the Sprint
Cup Series for a reason and I’ve got some work to do. I have to get
better.”  In my personal opinion,
this will happen in time and then the championships will follow.
I, much like Rick Hendrick, have much
praise for this instinctive driver.  Rick
Hendrick commented on the young Elliott ”Chase brings the kind of intangibles
that make him the total package as a driver. Not only is he a special talent
inside the race car, but there is a natural combination of competitiveness,
work ethic and smarts that you rarely see. Chase’s personality and demeanor
make him popular with fans, teammates and sponsors.” Chase’s natural
talent paired with his maturity should give this young driver a fast rise to
the top. As a fan, I look forward to watching what I hope to be a long and
fruitful NASCAR career.