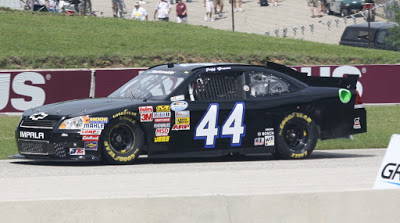 Something hit me when I watched the NASCAR Xfinity race from New Hampshire this Saturday. The television producer always focus on top 10, or at most top 20, of the drivers. Well, I suppose that’s normal, the viewer wants to see racing from top of the field, but sometimes you actually want to see the back of the field as well. Who are the teams and drivers from, for example, position 30 and below?

Normally, these teams are fighting hard just to make it to the start grid. Low budget and low finances, they are NASCAR’s backside that never gets the attention they deserves. In this teams, there are no ‘Sprint Cup ringers’ to fill the driving seat. Its not unusual that the driver is the owner/manager and all other positions that normally requires additional personnel. The cost to running a NASCAR team is enormous. I have heard figures of ~100 000 Euro (~108 467 USD) per race and team, and then we talking smaller teams and race classes.

Checking the price money for last Xfinity race at NH, TriStar Motorsports Toyota #19 with Jeff Green, earned 9,234 USD with his P40 spot. The #19 car normally drives 2-3 laps every time it manages to qualify to a Xfinity race and its most common reported problem is “vibration”. A classic “start and park” team, even though officially NASCAR don’t want to use that expression anymore. Green was the Xfinity (Busch) series champion in 2000 with a margin of 616 p to runner-up Jason Keller (PPC racing). This margin was the largest in series history until 2006. In those days, Green battled hard against Dale Earnhardt Jr ,Matt Kenseth and Jimmie Johnson for example. Today, the times have changed. Jeff, age 52, must have the most last position record in Xfinity series (without checking). Does this make Green/TriStar Motorsports to a bad team? Who are we to judge them? The above example is perhaps the most extreme of them all, but I hope you get the picture.

With this said, I have noticed that, for example, ‘social media’ is quick to judge small teams and drivers in a negative way. Almost making fun of them. For me, they have the same right to compete at the track as other “star drivers” or well funded teams. Without the small teams, the track would look empty and the race wouldn’t be the same.

My goal is to make a small ‘series’ here at PTR blog about the Xfinity drivers/teams that normally stands besides the medias spotlight and attention. I hope you readers will appreciate the idea. (JS)