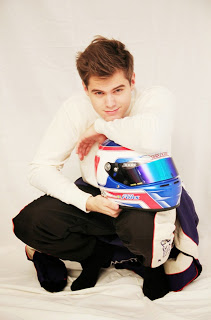 Jonas, age 22, is from Ingarö, outside Stockholm. Studies to be an engineer at KTH Royal Institute of technology. In 2011, Jonas became “mid-Sweden” kart champion. This led to a spot in the Swedish kart national team in 2012. In 2014, Jonas did his biggest move in his career when he went to drive/own a V8 Thunder Car team!How has the pre-season been? How much work is it for the team?

– The pre-season has been a total disaster. Before Skövde, we only had 20 minutes of testing. Everything worked fine, but the lack of testing time made it hard to really adjust the car settings. There have been things to take care of after the last race at Mantorp 2014. First time, in a race car this year, was at the SLC premiere in Knutstorp were I managed to set the best lap time with 0.5 sec. marginal. I was invited there by Oscarsson family (Niklas Oscarsson competes in Clio Cup for Brovallen Design).


Our team consists of 90% non-profit work force. Last season, we had 4 mechanics without prior experience of professional racing and 1 mechanic with previous experience (2 seasons) from the #64 team.
Who works with what at your team?
Jonas – driver, team owner, team manager, business relations and media relations
Albin – handles the front of the car, radio contact
Anders – brakes
Stefan – tires, rear of the car
Kevin – tire temperature, tire pressure
Micke – resource mechanic-In our team, we want to avoid to put titles on every person. We work with a faired organisation to gain more solidarity in the team. We want to avoid that things get more extraordinary than it is and work with areas of responsibilities and group discussions instead. With this way of organizing the team, it’s easier to work as a unit.

New season with new opportunities. Last season ended with P23 with 0 points. What can we expect from you and your team this season?
-Last season was more like a learning year, but  P23 was somehow a little misleading. We had 2 P11 places last year and competed hard every race weekend for points, but our luck wasn’t on our side. It would be a very good season for us if we can finish top-10 in total points – specially with only a half season experience before and with limited resources.

Some of the more experienced drivers are not competing this season, incl. 2014 champion Jens Edman. There are some new interesting younger drivers, Linda Johansson and Eric Stillman instead. Will this have an effect for you, and if yes – in what way?
-Stillman is taking over Edmans car and he will be a tough competitor. Johansson has many seasons behind the wheel and plenty of testing time with her car, so she ought to perform well. Mattias Lindberg is coming directly from STCC, so I counting on him to be at the top 3 spots this season.

Who is your favorite pick for 2015 champion in V8TC?
-I think Graff is the hottest candidate. He is a very experienced driver. I talked with him before the Skövde race and he seems in very good balance – enough to take home the championship.

How did the first test day at Gelleråsen racetrack (Karlskoga) go?
-We are not going to compete at Gelleråsen this year, so we chose to pass this test day and instead test at Mantorp Park – a track that we a racing at this season. The test at Mantorp was almost exclusively about fixing errors and make the car ready for racing at Skövde. Finally, we got a test where we felt that everything was just fine.

You got two very good results at the Skövde premiere. Had you/your team calculated for this and what can we expect further on?
-From P23 total to P3 in Junior-SM is a feeling that everybody can imagine. We are very happy with the results and personally almost shocked over the positive progress over just one winter.

Skövde was a race that we finally had a little bit of luck. Bare in mind that we are a team with very limited resources, so P10 total is still a very ambitious goal. Most important is that we are much closer to the top, time wise, and we will fight to lessen the distance under the season and to collect more points.

If you could choose any motorsport to race in, which one would it be?
My biggest “rush” is to challenge someone intellectually at very high speed, door to door and wheel to wheel. My first choice is racing – no doubt, as well as road courses or super speedways, otherwise Rallycross could be a interesting chapter in my career.

Extra. Follow Jonas Fors inside his #78 Camaro at Skövde Airfield!

I would like to thank Jonas for his time and wish him good luck in 2015 V8TC season.
– Jens Martin /Pure Thunder Racing


Did you miss the other two V8 Thunder Cars interviews? No worries! Click below for:
#77 Alexander Graff
#83 Patric Sundel