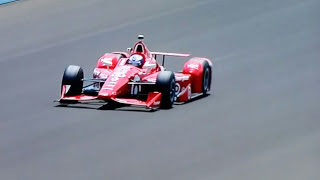 Its time to write something “out of the box” for Pure Thunder Racing. I watched the Indianapolis 500 race last Sunday, and I felt that a few comments and reflections are in place for the Motorsports biggest race event.

My comments will not be a regular recap of the race, we all now that Team Penske driver Juan Pablo Montoya got to drink the famous milk bottle after the race. Congratulations Montoya.

My thoughts is about how awesome racing Indy Car is on oval tracks, but at the same time, the danger level is way to high – both for the drivers and the crowd. The speed is high, really, really high, about 230 mph (370 km/h). It started already in practice and qualifications. There we had hard crashes and accidents. James Hinchcliffe couldn’t even start the Indy 500 due to a hard crash, luckily he manage to survive and now seems to be OK.

At the race, there were directly a minor accident on the first lap, involving a few cars. Nothing big this time though. Sebastian Saavedra was involved in a hard three car crash on lap 176 and couldn’t at first get out of his car. You could see what enormous pain he was in, when the rescue crew fighting to get him out of the car. Horrible pictures to witness for all racing fans. He must now be reevaluated for his foot contusion. The other two drivers could walk away from the crash without greater harm.

There were, again, a awful pit road accident involving crew members. One car was driving out of his pit box (the crew released him to early) and hit another car going in to his pit box. Because of this, crew members accidentally got hit in the legs and felt hard to the ground. That incident was also awful to witness. I think that the crew members was alright later on.  The crowd, even with safe barriers, is at risk because Indy Car parts easily shatters away for a long distance. 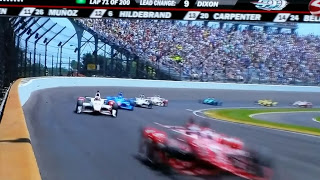 Now that was the downsize with Indy 500 race. Like one driver said when he got interviewed (not literally); “I know the risks, if I get scared then its over for me as a race driver“. The upside then? The racing is awesome! You got everything that you want as a race fan. Lead changes, tight racing, thrilling duels and if your car falls behind early, you can make that up – Montoya was in P30 and won the race.

How about that last 15 laps? I think that was one of the best, nerve wrecking, thrilling and exciting finishes in long time! 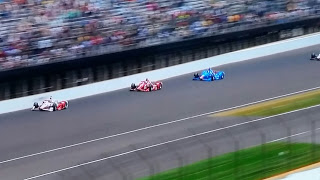 So now, perhaps you see dilemma with “heaven or hell” for Indy 500. What to do? I think there must be a mix between safety and speed. The Indy Cars have improved its safety through the years. The cars weight is very light an the down force is tricky and this together can easily lift the car in a accident. In NASCAR, there you have restrictor plates at super speedways to lessen the speed. Maybe this can be implemented in Indy Car as well somehow?

There is no easy answer to this, but peoples safety must the first priority at all levels. I do hope that the people in charge in Indy Car series bare this in mind 24/7. (JS)