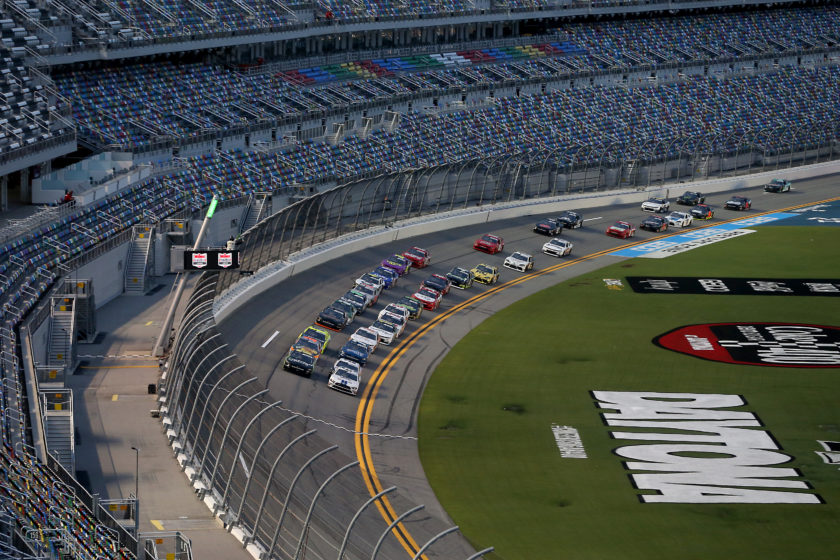 Another weekend with five races over three days, I don’t know but maybe that is to much to take in for the weekend! Well Trucks and Indy Car double header at World Wide Technology Raceway at Gateway and Xfinity and Cup series at Daytona International Speedway.

Sorry to say but I’m not to much fond of Superspeedway racing in the form we see today lots blocking and drafting. However one thing I love about “plate-racing” is the fact that it’s a great chance for the Teams that works with a smaller budget to get a good finish inside top five or even a win. We saw a perfect example on Friday night in the Xfinity race when Gray Gaulding finished second in the #07 driving for Bobby Dotter, after Ross Chastain tog out his teammate AJ Allmendinger “doing what ever it takes” to get a win” and Allmendinger doing his thing in the last corner. That move by Chastain left him with a P6 while AJ Allmendinger never made it back to the checked and ended up P16. This handed the victory over to Justin Haley and Chase Briscoe in third and Joe Gibbs teammates Riley Herbst and Harrison Burton rounding up top five. Also shout out for #92 Josh Williams , P9, and #4 Jesse Little P10 .

Not to much to say about the Cup race other than we got two “Big Ones” and about the same typ of racing we seen over the last couple of years, blocking and side drafting and with the force of the run coming from 3 or 2 cars behind it’s easy for the car doing the blocking to misjudge the speed from the cars coming up from behind.. Nail-biting yes, but is it good racing? I must say I like short track racing more but every race has it’s own heights and lows! Anyway when the dust hade settle and the black and with checked flag hade flown the #24 of William Byron had won the race and by that secured his place in the NASCAR “play off” Shut out goes to Brendan Gaughan in the #62 this may very well be his last Daytona start, yet another one of my favorites to hang up the helmet at the end of the season! I

The truck race was maybe not the best Truckrace of the season but not the worst eider! The highlight of the race was Todd Gilliland leading laps and running near the front and seems to have the Truck to beat but with just under 40 laps remaining. Sheldon Creed over drove his truck into one of the corners to get under Gilliland who made contact with the outside wall forcering him to pit for damages under green, while Creed would continue to win the race before Brett Moffitt and Austin Hill in third. Shut out to #3 Jordan Anderson back in the top 20 after a few weeks with some bad luck!

The IndyCar races was something of a let down with only a few passes on the race track other than when cars pitting. In the Truckrace we saw some side by side racing using three lanes while in the IndyCar race everyone was running the bottom of the track making one longing for the return of Sam Hornish Jr to return to the series! From a Swedish stand point Marcus Ericsson had a p5 finish in race one but a mechanical failure in second race had him a couple of laps down and finishing dead last. Felix Rosenqvist had a solid weekend with a P8 finish in the first race and P7 in the second. IMHO Indy car needs to take a look at the aero kit they run on the cars at the Intermediate tracks! Oh Almost forgot winners Race 1 Scott Dixon, Race 2 Josef Newgarden.

I have been keeping an eye on the Fastes Drivers on pit road in NASCAR Cup series and going into the “Play Off” we have had 38 drivers speeding on pit road and Quin Houff leading the list with 8 penalties and Corey LaJoie in second with 7 and JJ Jeley with 6 penalties.

That’s all for now Stay Safe
//B