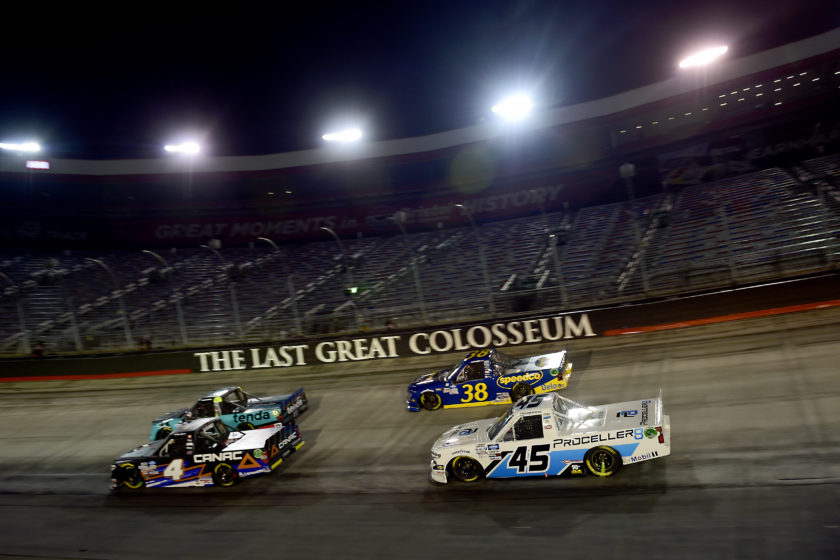 I was so much looking forward to the Bristol races this weekend and one thousand laps of good Bristol racing in the three NASCAR series. And Bristol didn’t let me down this time! Three different styles of races, maybe due to the PJ-1 laid down in the corners and the track rubbering up.  Thursday stared out with rain all day, but it let up just in time to get the track dried out before the race. Due to the rain, NASCAR did not have time to re-apply the “Coke Syrup” before the start of the Truck race, so the Truck had to make do with what was left after the All-Star races.. IMHO it was a good thing as we saw later in the race what was left of the PJ-1 wore off and a higher groove began to come in, giving the drivers more lines to choose from in the race.

The last eight races have been won by either a truck from GMS or Thor Sports, with a 1-2-3 win for Thor Sports last week. This week it was the GMS trucks that were the class of the field. In fact, a GMS Truck led EVERY lap of the race, second place finisher, Brett Moffitt led a race-high 117 laps. The winner, Sam Mayer, took the lead from Moffitt and led the last 30 laps while seventh-place finisher Tyler Ankrum led the remaining 53 laps. Tanner Gray came in third and Parker Klingerman in fourth with Trevor Bayne coming in fifth. The unfortunate Trevor Bayne found himself disqualified when his truck failed to meet the post-race height requirements set by NASCAR, leaving the fifth place to KBM driver Chandler Smith.

Later on the same evening the race winner Sam Mayer went on to win another 200 lapper this time in the ARCA East Series, his fifth of the year in the ARCA series. I’m looking forward to seeing him driving for JRM in the Xfinity series in the later parts of next year! ( link )

Before the Xfinity race NASCAR applied some more of the PJ-1 to the bottom grove in the corners that made this race somewhat different from the Truck race was the day before, with the preferred racing line on the bottom of the track. That led to the front starters, Ross Chastain and Justin Allgaier leading most of the laps in two first stages with the exception of a few laps when Ryan Sieg led after applying some pitting strategies! But at the end of the race Allgaier seemed to lose a bit of the handling on the race car and fell back a few spots, leaving Ross Chastain doing battle with Austin Cindric and Chase Briscoe for the win. This time Chase Briscoe found his way back to victory lane for his seventh win of the year and once again Ross Chastain took a second place and Cindric in third. Shout out to Antony Alfredo for another top ten in the #21 for RCR! Unluckiest driver on this Bristol night must be BJ McLeod, a very, very hard crash on lap 63 – after contact with his JDM teammate Jeffrey Earnhardt, then collecting Vinnie Miller in his own BJMM car unexpectedly while sliding back down the track!

Before the Cup race NASCAR decided not to put down any more of the “Coke Syrup” on the track, which proved to be an excellent choice this time. The higher groove quickly came in and Kyle Busch made good use of it flying through the field after starting at the back due to the car having some inspection issues. I was a little surprised about how many had issues with loose wheels, other mishaps and speeding on pit road. BTW we have a new leader in the fastest man on pit road League. JJ Yeley is on top with 9 penalties, just before Quin Houff with 8 and Corey LaJoie with 7 penalties. However at the end of the race it was Kevin Harvick and Kyle Busch who put on a show, leading a combined 385 of the 500 laps with Harvick the winner, Kyle Busch in second  and the “non play-offers” Eric Jones and Tyler Reddick in third and fourth. A yellow flag in the last green flag pitstop cycle shuffled the field a bit, and when the checkered flag flew there was only six drivers on the lead lap. Shout out to Chris Buescher, Ryan Preece and Michael McDowell 8,9 and 10th

All in all, a weekend filled with good racing and no weather delays in “Thunder Walley ” Also before I shut down for the week CONGRATS to Ross Chastain. Love to see you in the Chip Ganassi #42 next year.

Let’s see what Vegas has in store for us next week.