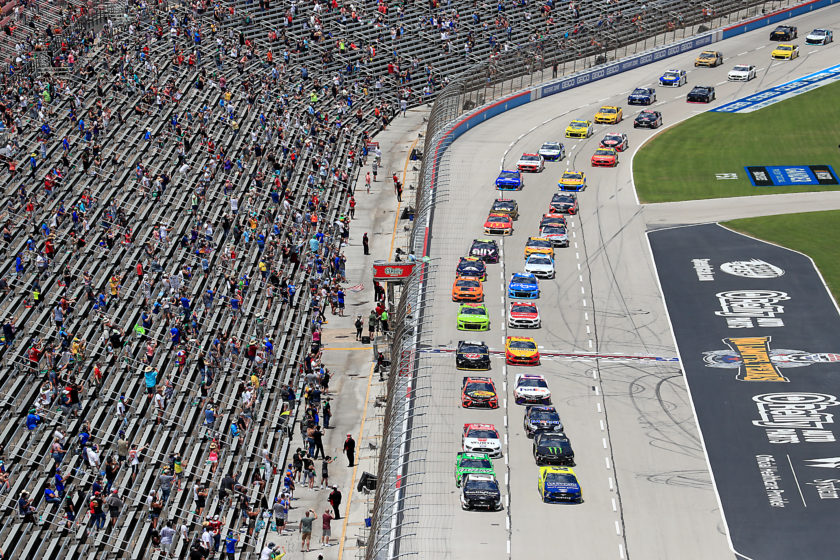 I really like racing at Iowa Speedway even if I haven’t seen that many races from there only a few IndyCar races and some races in Trucks and NXS IMHO the racing there has been exciting. So it was a bit sad when earlier in the year, NASCAR announced that Iowa Speedway would not host races in NASCAR Gander RV & Outdoor Truck Series and both off the NASCAR Xfinity Series as initially planned, due to COVID-19, in 2020, even though Iowa state government would have allowed fans at a limited capacity. And even sadder when I saw ( per Jayski ) there are rumors swirling that the race track is likely to either be closed or sold before years end. I was hoping to see a Cup race there sometimes in the near future so lets hope for the best.

A few nots from the races: Indy Car Series had a Great Idea on setting the field for the races. Qualifying with two timed lapps, the first lap to set the lineup for race one and the second lap for race two.

After some god racing at the start of race 1 and a mixed bag of strategies. In the pitstop cycle around lab 145, Will Power lost his left front wheel and hit the wall Luckily no one got hit by the bouncing wheel. After waving off a restart on lap 157, the Dutch rookie, Rinus VeeKay appeared to slow down behind eventual race winner Simon Pagenaud and move to the right, in order to fall in behind Pagenaud. Colton Herta who didn’t realized that the restart had been waved off was caught in the mess with cars checking up , launched his No. 88 Honda over the left-rear tire of VeeKay’s No. 21 Chevy, and got airborne with lots of debris flying from the cars while hitting the top of the Safer barrier!! Now we know why Indy Cars Series installed the aero screens on there cars!

Quote: “It was a bit scary on the restart,” Marcus Ericsson told RACER.com he ducked inside the car as pieces pelted the screen. “There was a lot of debris flying and some big pieces was hitting the aero screen, so it shows IndyCar has done a great job with the aero screen. They did some really good work today to protect me”.

In Race two we got to see some OK racing with a very strong performances from team Penske drivers. With Josef Newgarden winning ahead of His teammate Will Power and Race one winner Simon Pagenaud coming in fourth. The Chip Ganassi teams didn’t wave the best of weekends with Scott Dixon inside the top five in both races. So the only Swedish highlight of the Indy weekend would be Florida native Oliver Askew, who’s mother comes from Sweden, with a p3 in race one and p6 in race two!

Much talk about track preparation last week, cleaning and PJ1 and so on! My Take on the subjects!! First of it’s sad that we even have this discussion but with the way this generation of cars are set up now and with the spoiler package we have it is what it is but maybe not the way we the fans would like it to be!!

How ever I do think NASCAR and the track crews have to rethink how to do the in race cleaning on these track that are spayed with the “Coke syrup” Like the Guy up in the NBC Booth I also think it surely can’t be that smart to take out the Jet dryers and blow down the marbles and grits into the sticky PJ1 prepared surface in order to send it of the track! Come on NASCAR put on the thinking cap and figure out a smarter solution to this! Maybe the Sweepers can be modified to be more effective and solve this problem!

Next Subject that created some headlines after the Texas race was the unfortunate accident involving Quin Houff who messed up going into pit road on lap 307. Well StarCom Racing this is what you get when you take a young kid with sponsor $ instead of a veteran with tons of experience driving more or less “crappy” low budget cars, getting them better finishes than the cars should. So, yeah maybe NASCAR needs to take a look at this, not the first time and not the last, we see drivers with more money behind them than Racing experience gets a ride in Cup cars!!.

What about the racing at Texas? Yeah well not to much to say, hard to tell I’m not that excited. NBCSN didn’t made too good of a job with covering the field in both there races, so all in all the racing in the 3 series was as well as expected on the Texas track. A few notes 1 – 2 finish for RCR in cup was an unexpected but nice and will help them to take a step to become better witch will benefit us fans with closer racing. Oh and after Kyle Busch got DQ:ed Austin Cindric gets third win in a row in NXS!! Well Kyle Busch won the Truck race later on Saturday night beating his young driver Christian Eckes who put up a fight with him up until the last round of green flag pitstops when the Team owner, Kyle Busch, pulled away!

I tried to watch one of the Supercars races from Sydney but with no visible numbers on the car, not knowing the driver and por graphics I gave up on that!!