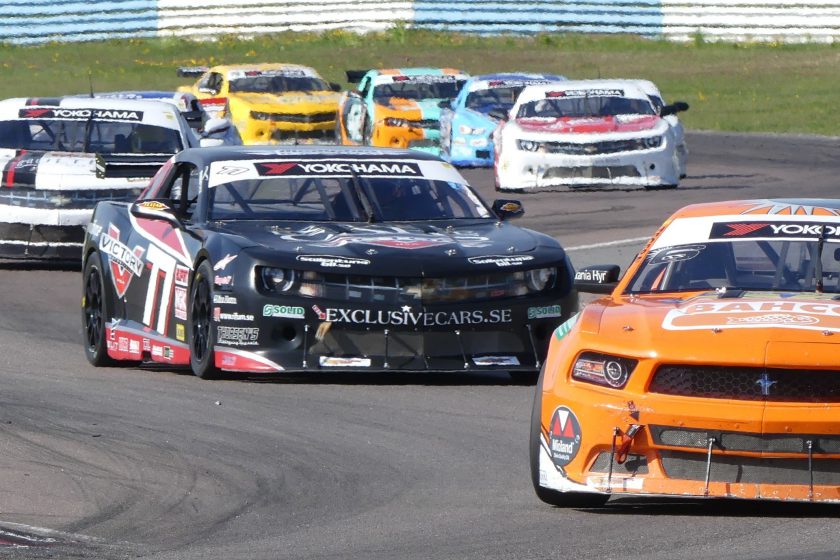 Finally, Sunday morning was here. It was, however, not an ordinary Sunday morning, it was a season’s premiere Sunday morning for V8 Thunder Cars (V8TC). I think you race fans all know that magic and enthusiastic tickling feeling that goes through your body on a season’s premiere day. I woke up 03.30 (3.30 AM) to a chilly but clear sky morning. My old diesel “war-horse” (my Nissan Qashqai car) was set to depart at 04.30. At this time of the day, the highway is quiet and calm, and the 3.5 hours of driving to Mantorp Park was a peaceful journey (the return journey was however, a different story, not reported here…)

For once, my credential information was ready at the main gate of Mantorp Park. The V8TC staff were very friendly and approached me in an accommodating way. Already here, a change of approach compared to the Scandinavian Touring Car Championship (STCC) staff if you ask me. You don’t need to flash with a Polestar Racing or SVT (Swedish Television) jacket to get the right approach from the organizers/track staff. At 08.15, I was already at the press center for an informal chat with V8TC press officer Joakim Ternstrom, who has made a tremendous effort to promote V8TC Series. Bear in mind that V8TC has gone from a support Series to STCC, to a main Series event with own support Series in just approximately six months. Impressive work.

The racing was set to start at 09.00 this hot, cloud-free, sunny spring Sunday at Mantorp Park. The support classes of Radical, Modsport 1-2-3, Legend Cars, RS Clubman, Roadsport A-B-C and Ginetta Series did their races between 09.00-12.00 and 13.30-16.30. I must say that I have no prior experience with this particular support race Series and it took a while to “get the feeling” for them. I, who have watched STCC and its support classes for a long time, needed some time to adjust and reset my mind. I must say that my feeling for all the new support classes did come in the afternoon, when watching them race for a second time. Most notable race from the support classes was the Legend Cars Series second race. This race had all the ingredients you want as a race fan; hard, tough racing, broken down cars that never give up and drivers that give 110 % in every turn. Wow!

But of course, all race fans waited for the main event – the startup of the massive field of V8 Thunder Cars! The V8TC starting grid was reinforced with cars from both Finland and Estonia (Baltic Cup) and included totally 26 cars (new record I think) in the first race. Rookie Andreas Wernersson (Memphis Racing) unfortunately did not make it from the warm up lap and had to retire directly. Notable from the first race was the confusing race control management for handling the line-up on the starting grid. It took a very long time to get all the cars in the right order – cars going forward, reverse and to the side. For me, it was almost embarrassing. Yes, there were plus ten more cars than normal, but how hard can it be to line up 26 cars? Race control learned their lesson on the second start though.

The first race was controlled by pole sitter #6 Ford Mustang Andreas Ahlberg (Micke Kagered Racing) from the start to the end. Even a yellow flag with the safety car couldn’t disturb Andreas to take the checkered flag. #96 Palnér did overtake #77 Graff in end for the runner-up position. Notable results from the first race; #42 Christoffer Bergstrom continued his positive trend from his last rookie season with a position eight finish. Best finish from the Baltic drivers was #92 Toni Lahteenmaki in position nine. #13 Toni Persic was excluded from the race because he ignored a race flag.

In the second race, tension was in the air. If there was strong sunshine heat on the race fans in the open stands, there was another heat building between the drivers. #96 Chevrolet Camaro Marcus Palnér (Team Pampas) started at pole position for the second race (he had the 2nd fastest lap in qualifying). The second race was a race between pole sitter Palnér and third starting #77 Chevrolet Camaro Alexander Graff (Memphis Racing). Andreas Ahlberg tried to pass Graff on a few occasions, but could not keep up with the #96 and #77 car. Palnér and Graff switched positions numerous times and it all went down to a last lap, last curve pass by Graff for the win. It was a spectacular and an aggressive pass by Graff that lead him to victory lane in the second V8TC race. #6 Andreas Ahlberg ended up in the third position.

Notable results from the second race; best finish by the Baltic drivers was #30 Jari Nurminen (2nd fastest lap time) in position seven. Last season champion #7 Mattias Lindberg (Bryntesson Motorsport) was hard to recognize in his new team, with a position fourteen finish. #13 Chevrolet Camaro Tony Persic (TPR Motorsport) in his new black paint scheme did rebound and finished in position thirteen. #44 Peter Moller did not start. #42 Christoffer Bergstrom did not respect a race flag and was excluded from the race.

I can just say that I’m impressed over the quality that V8TC have displayed. It’s not an easy job to go from a support class Series to a main event Series in such a short amount of time. You need to find all the right people to work with and you need to find new support classes too. Also, you need to find available race tracks that suits the V8TC concept. At Mantorp Park, V8TC managed to put all the pieces together and held a well-managed race weekend as good as STCC. Also, and this is the best of it all; V8TC did put 26 cars in the starting field compared to STCC’s ten-car starting grid at Skovde. Say no more.

I just have one negative thing to report. Where are you race fans? The stands are almost empty and this is almost the same for STCC’s events. The entrance ticket for V8TC at Mantorp Park was 200 SEK and that included free admission to the stands. Last year at STCC Skovde race, a seat costed 495 SEK. For this money, you get top racing from nine o’clock in morning to five o’clock in the afternoon. For me, nothing else could be better!